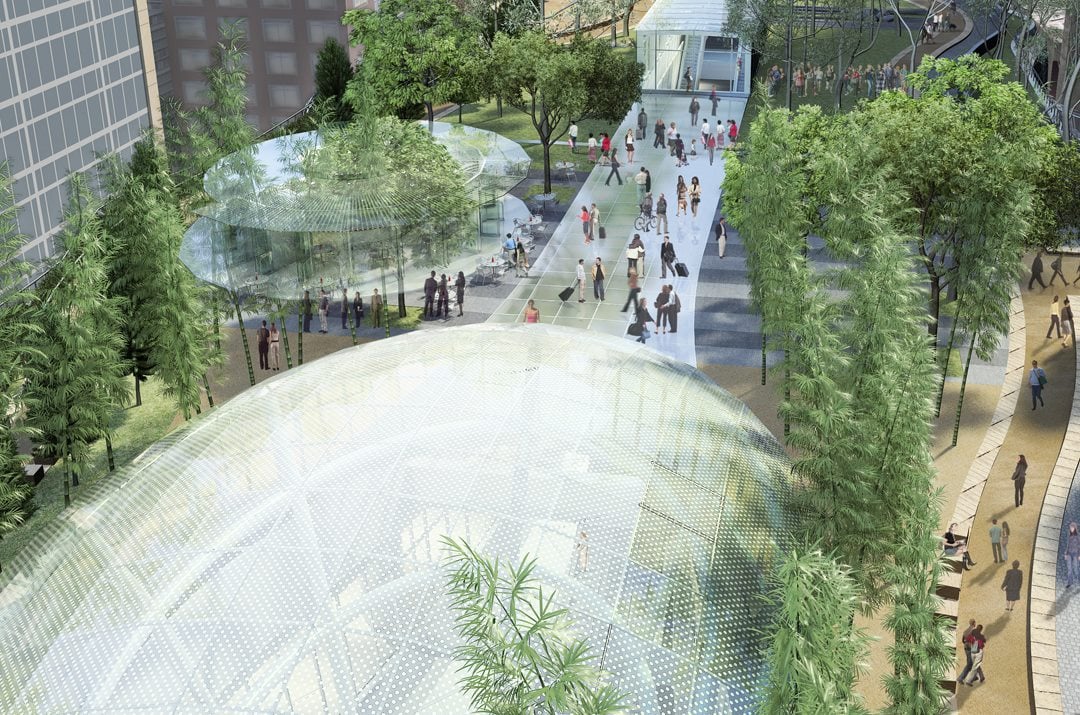 We tend to think of cities and the natural world as two distinct realms that rarely meet. Urban living imposes order on vast metropolises, while untamed plants and wildlife rule the landscape beyond. But, increasingly, the most innovative examples of urban design combine nature and architecture seamlessly, resulting in enchanting structures that subtly change with the seasons. Some examples of this phenomenon are almost closer to works of art than architecture. For instance, at the Kawachi Fuji Gardens in Kitakyushu, Japan, 150 wisteria plants hang from a man-made tunnel. In Buddhist tradition, the wisteria symbolizes prayer, and the experience of walking through this tunnel of purple and white flowers evokes tranquility, coupled with happiness at the arrival of spring.

Many projects that blend the man-made and nature-made are situated—perhaps not coincidentally—in the world’s most dynamic and densely populated cities. In Hong Kong, a new project called the “Canopy,” developed by Boutique Design, comprises 54 luxury duplex residences and an expansive private garden. The building, which is designed so that each apartment opens onto a landscaped outdoor space, feels as much like an old-fashioned tree house as a city dwelling. Boutique Design characterizes the gardens as “green envelopes” that integrate nature with the architecture of the Canopy.

Back in the U.S., a creative masterpiece has recently taken shape adjacent to the beloved High Line in New York City’s Chelsea neighborhood: 520 West 28th Street, designed by the late Pritzker Prize-winning architect Zaha Hadid, has a curving V-shape pattern that deftly provides residents a combination of magnificent views and interior privacy as it animates the building’s facade. Like a plant with winding tendrils, the chevron design moves across the surface of the building in one continuous line. Directly below, the tall grasses of the High Line offer a striking patch of green, with variegated colors and textures, that can be enjoyed in person or from one of 520 West 28th Street’s residences.

And, on the West Coast, a new ultratall luxury tower has a sky bridge that leads residents to both a transportation hub and a rooftop park. 181 Fremont will be the tallest mixed-use building in San Francisco when it’s complete, and its proximity to the new Transbay Transit Center and City Park will give it serious green-design bona fides. Inspired in part by the High Line and the Promenade Plantée in Paris, the 5.4-acre City Park will double as a green roof, insulating the interior of the Transbay Station and cooling the surrounding climate. On top of that, the park will be home to dynamic play spaces, gardens, jogging trails, a cafe and restaurant, and a 1,000-seat amphitheater for live music and performances. And because it’s San Francisco, there will be an extra-large bike storage facility, too!

Meanwhile, in South Florida, where the beaches and waterfront seem to define every aspect of life, Monad Terrace, an innovative project from architect Jean Nouvel and JDS Development, was designed with a mix of practical resilience and natural beauty in mind. With rising sea levels shaping architecture and urban planning today, Nouvel engineered Monad Terrace to be much higher above sea level than current regulations require, but it still glories in its surroundings. Its 59 residences are situated around a secluded lagoon on Biscayne Bay and sheltered by a lush climbing garden composed of Spanish moss, tillandsias, bougainvillea, and passion vines. Honeycomb panels reflect and diffuse sunlight as it glints off the water—a feature that’s emblematic of Nouvel’s approach to design, which is always informed by the physical sites of his projects, from the topography to the weather, plants, wildlife, water, and light. “It’s not only a building,” he says of Monad Terrace. “It’s an object belonging to the landscape.”