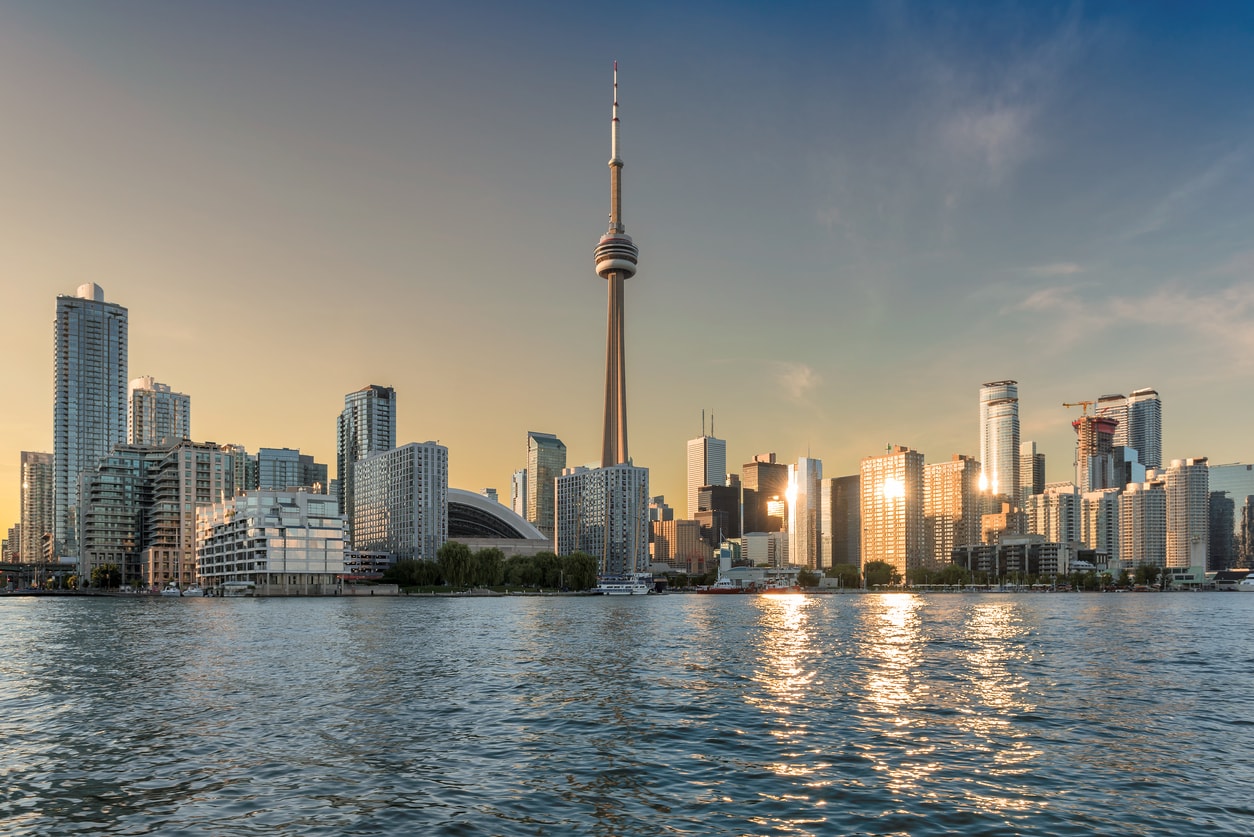 Certain cities, like San Francisco, Seattle, and Cambridge, are known for being brainy. They’re home to robust technology sectors and have booming populations of high-tech professionals to match. But what about cities that are actually smart? What if a city could shore up its energy grid when a big storm was predicted, or had sidewalks that could heat up automatically when it snows? From North America to South Korea, urban planners, architects, and engineers are designing cities for the future, and in the process, they’re finding out what the urban streetscapes of tomorrow might look like.

In 2017, Alphabet, the parent company of Google, selected a parcel of land on Lake Ontario in Toronto as the site of Sidewalk Toronto, a prototype “smart” community. Alphabet’s Sidewalk Labs partnered with Waterfront Toronto and invested $50 million to transform the lakefront area into a hyperconnected, sustainably built urban community. New renderings from Michael Green Architecture reveal a landscape that looks almost preindustrial rather than high tech: the initiative’s mass timber construction draws on the resources available in Ontario’s nearby forests, and the choice of natural wood is healthier for both builders and residents, the architects say.

But Sidewalk Toronto will embrace nature with a twist: to keep outdoor activity going during Canada’s very cold winters, the city will employ engineered shelters for the winter and shades for the summer, enabling outdoor public areas to be remarkably temperate year-round. Covered walkways and heated streets will make the area accessible even in frigid January. Though it all sounds dazzlingly modern, the design actually borrows an idea from Ancient Greece: Sidewalk Toronto’s covered arcades are modeled on Greek stoas, which were the covered walkways where people could browse market stalls and meet one another in early cities.

The experimental architectural practice Carlos Ratti Associati has devised a concept for “dynamic streets,” which would make use of precast modular pavers. They come in a variety of surface finishes, with some capable of melting snow and ice. And they have LED lights embedded into them so that sections of the street zoned for different uses, such as those for bicycles or pedestrians only, will glow in a particular color. And because the pavers—like their city—are “smart,” Sidewalk Labs can track how the streets are actually being used and redeploy or replace parts of the street as needed.

This being Alphabet, Sidewalk Toronto will be ultraconnected: digital kiosks will offer free, secure wi-fi and real-time transportation and traffic updates. This could only work in a place where there was relatively little infrastructure to begin with; Sidewalk Toronto is being described as the first residential area that is built “from the internet up.” In a sense, it means weaving the convenience of apps and digital services into the environment for an even more seamless experience of travel, shopping, work, and play. Sensors will allow the city to offer valuable information to first responders in the event of an accident, and over time, to collect data that will help urban planners cater to the community’s needs. The enclave will house an array of commercial storefronts, housing, recreational amenities, and office space, along with lots of landscaped public space.

The style and innovations of Sidewalk Toronto mark a notable shift from previous decades’ vision of what the “cities of tomorrow” would look like. In 1939, the General Motors “Futurama” Pavilion designed by Norman Bel Geddes for the World’s Fair in New York City imagined that by 1960, the country would be connected by a massive system of highways for individual cars. Their timing was pretty accurate: the Interstate Highway System officially got the green light from President Eisenhower in 1956. As streamlined model cars zipped through the sleek traffic lanes of “Futurama,” it was clear that little thought had been given to public transportation or, for that matter, walking. Almost 80 years later, the designers of Sidewalk Toronto are finding ways to make driverless cars, cyclists, and pedestrians comfortable in a shared urban space surrounded by trees and timber construction. It may sound like utopia, but the future is closer than we think: the project will break ground in 2020.